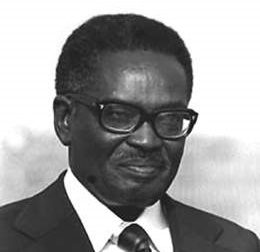 António Agostinho Neto was an Angolan politician and poet. He served as the 1st President of Angola, having led the Popular Movement for the Liberation of Angola in the war for independence. Until his death, he led the MPLA in the civil war. Neto was born at Ícolo e Bengo, in Bengo Province, Angola in 1922. Neto attended high school in the capital city, Luanda; his parents were both school teachers and Methodists; his father, also called Agostinho Neto, was a Methodist pastor. After secondary school he worked in the colonial health services before going on to university. The younger Neto left Angola for Portugal, and studied medicine at the universities of Coimbra and Lisbon. He combined his academic life with covert political activity of a revolutionary sort; and PIDE, the security police force of the Estado Novo regime headed by Portuguese Prime Minister Salazar, arrested him in 1951 for three months for his separatist activism. He was arrested again in 1952 for joining the Portuguese Movement for Democratic Youth Unity. He was arrested again in 1955 and held until 1957. He finished his studies, marrying a 23-year-old Portuguese woman who was born in Trás-os-Montes, Maria Eugénia da Silva, the same day he graduated. He returned to Angola in 1959, was arrested again in 1960, and escaped to assume leadership of the armed struggle against colonial rule. When Angola gained independence in 1975 he became President and held the position until his death in 1979.